The word dragon was more frequently used in the medieval ages than the current world. It is used to depict a serpentine legendary creature with bat type wings growing from its back and two pairs of lizard legs.

The word dragon roots from the Sandkrit dric meaning “to see”. This refers to its ability to destroy using its eyes. The medieval dragon was perceived as evil and fierce. It fed on mad and had the ability to fly and breathe fire.

From its physical description, dragons are portrayed as reptiles, laying eggs and having scaly bodies. Their main job was to guard and protect hidden treasures and fortunes.

Dragons were depicted as intelligent creatures. They lived in isolated areas, far from humans e.g. in caves. When they come out they were known to wreck villages. This made them the villain, where a hero must rise to kill it so as to safeguard human. However, some took the roles of protecting good people from the bad.

When it comes to dragon statues, the perception of what a dragon is can be distinctly seen in the sculptures. This depends on with the culture which varies in spatial aspect or more of culture diversity. Each culture seems to have their own perception about the dragon and hence their curves.

In Europe, a dragon is depicted as an evil and menacing creature. However, in Asia, the same dragon are revered for wisdom as they are intelligent than humans. As for some cultures, the dragon possesses magic or supernatural powers with others capable of human speech.

One of the popular dragon statues is that of La Gargouille dragon.

La Gargouille, according to the French legend tale, was believed to live on the banks of river Seine. He had bad habits of causing floods and swallowing ships. There are several version of the story. In all of the version, the bishop, St. Romanus, subdue the monster with a crucifix. Gargouille was burned at the stake but its head, as well as the neck, could not burn. This is because it was already used to its own fiery breath. Therefore, the head was mounted on the wall of a church meant to scare evil spirits away. This became the model of the gargoyles to-date. Just like in its original tale, a gargoyle statue is fantastic in guarding your treasure and in warding off evil spirits. It can be placed outside e.g. in a garden or inside the house depending on its size and material of make. 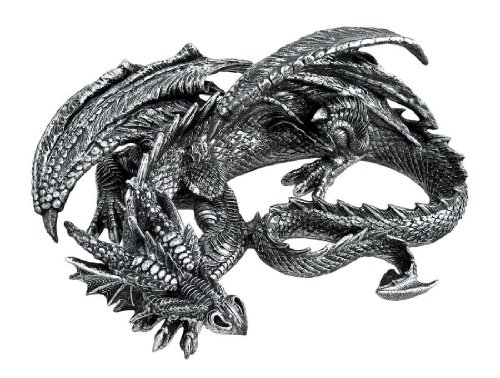 Gothic dragons originated from the Western medieval lore. They are used in protected lairs e.g. caves. Gothic dragons are depicted as malevolent creatures of the earth. They are featured with a long reptilian tail, visible teeth, beast-like head, and narrow snout giving it a fierce expression. Most importantly, gothic dragons have a crown crest giving them a status of dragon’s king.

By using this dragon, in your garden, you give your home an ancient, timeless feel.

Chinese dragon
Chinese dragon statues are quite different from the previous two. They are sued to project a mystical influence of the Far East. These dragons lack wings but preserve most of the other features as discussed above. The dragons are masculine which is Chinese philosophy of “yin”.

Feng Shui dragons are a symbol of honour and Chinese traditions: elements of wellbeing, the courage to balance and prosperity. They are also a symbol of Emperor and you will notice this if you watch Chinese emperor films. Generally, Chinese dragons symbolise power, wisdom and strength. They are also believed to bring back good luck and fortune.

Where to buy dragon statues

There is a wide selection of dragon statues at online stores and local shops. Here, you will find a wide range of gothic style dragons, Chinese dragons, Asian dragons etc. They are sculptured by a range of artists.

Dragon statues make great gifts for those who love medieval arts, Feng Shui and mystical beasts. These statues can be made into anything e.g. a dragon coffee table, dragon chandelier, gothic dragon mailbox etc.

Depending on the material of make, size and use, these statues are suitable for indoors or outdoors. Thinking or a gargoyle garden? There are plenty of resourceful material which can help transform your garden into a mediaeval garden.

Before you cash out for the statue, put all the necessary factors into consideration. Some of this include budget, the meaning of the dragon, quality, space, transport, the authenticity of the seller, delivery time etc.

Before you buy search online and see how others who won the statue feel about it. This will help avoid petty mistakes which might cost money and time e.g. returning to sender. You could seek a specialist help if the dragon statue is expensive or find an authentic website to make a purchase or consult.